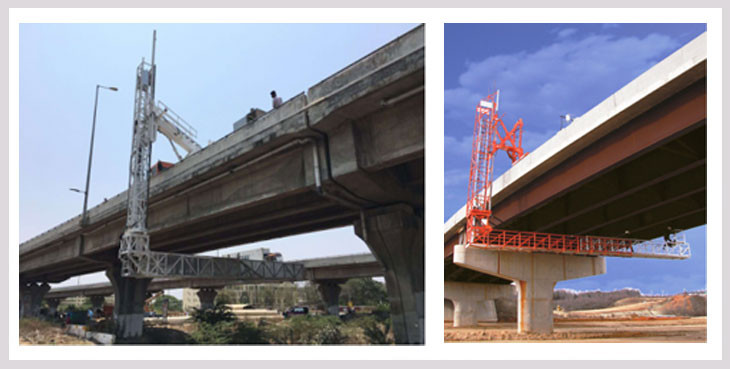 The Mobile Bridge Inspection Unit (referred as MBIU) is an Electro-mechanically driven Articulated Structure mounted on a vehicle (a truck) as an aid towards proper inspection of bridges or similar infrastructures by enabling an inspection team of 3-4 persons carrying instruments access to the underside of bridge decks over flowing rivers or gorges. 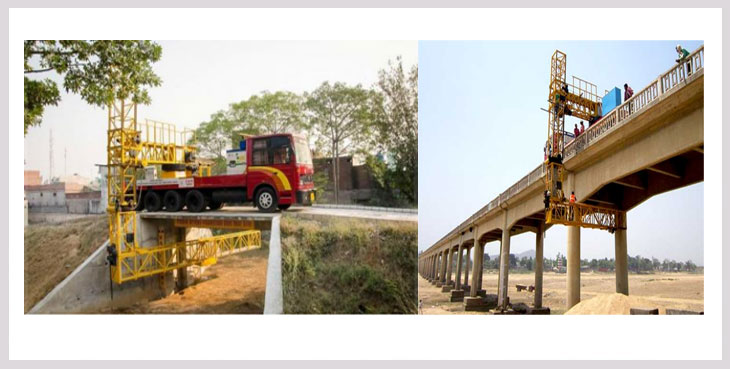 Condition of Road:Roughness, Rutting, Distresses (Cracking, Potholes, Bleeding, Surface failure etc.); (Note- All inventory items shall be recorded for each lane and Geo-tagged).

TRUSTED RIG INSPECTION, OCTG Pipe inspection Services AND TUBULAR INSPECTION FROM A WORLD LEADER
As a world-leading provider of comprehensive rig, pipe and oil tubular safety, inspection and maintenance services, you can rest assured that your project is in safe hands.

With more than 1,000 projects completed for the oil and gas industry, we offer you unrivaled experience, expertise, specialized engineers and technicians, and worldwide resources. That is why we are the first choice for major operators and drilling contractors across the globe. 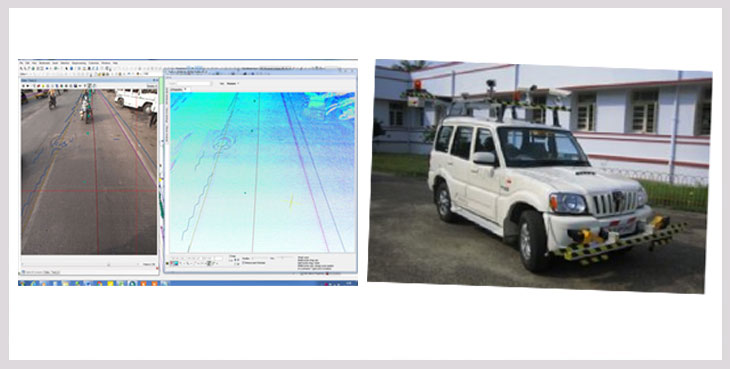 The 3D Pavement Surface LiDAR System specifically developed for Road Condition Assessment completely independent from limitations regarding the speed of the mobile survey platform while offering utmost measuring accuracy in the sub-mm range. The system can detect the smallest irregularities of the pavement surface and comes with a software solution to generate images and to provide full 3D road surface models.
Road Inventory and Road Condition is major issue is India. We use Network Survey Vehicle for complete road analysis and Road condition and Payment analysis in defining true condition of road network. Network Survey Vehicle (NSV) mounted with equipment such as Laser based automatic crack detection, high resolution digital cameras for RoW and surface pavement defects, high accuracy DGPS receiver and in vehicle data 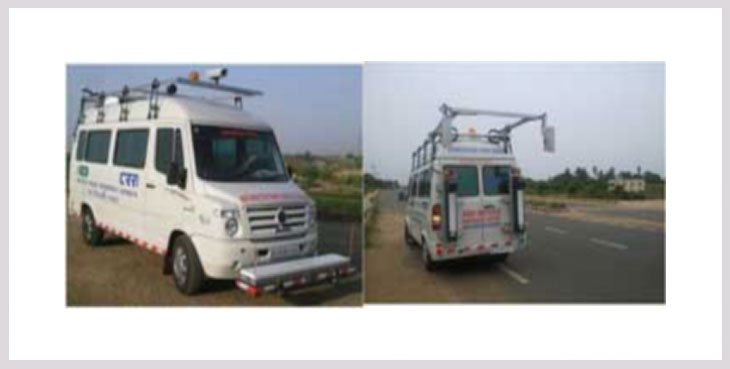 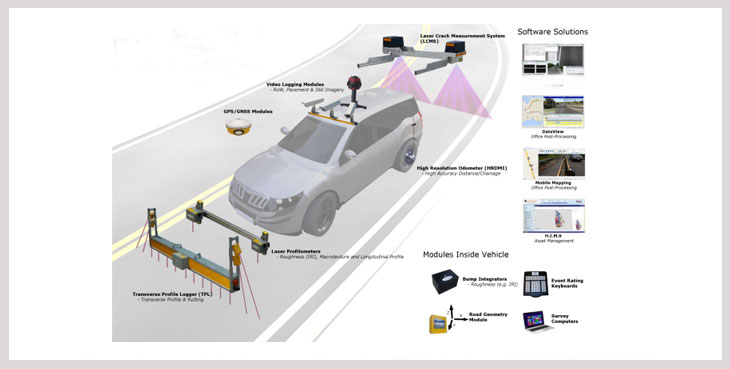 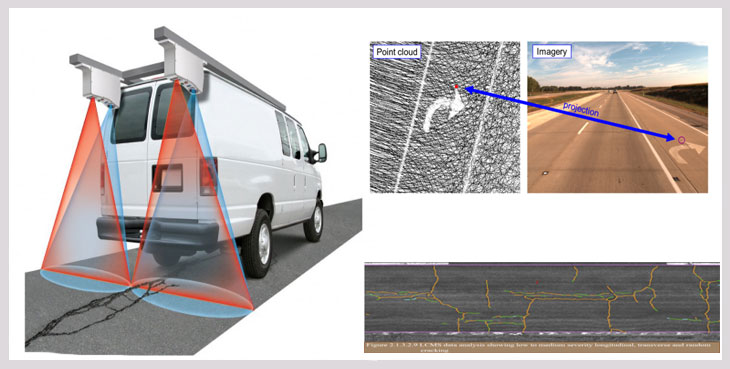 Pavement strength test is performed to evaluate the strength and the current condition of the pavement. It can be used for new laid pavement or existing aging pavement.

To perform the Pavement strength testing , A method called FALLING WEIGHT DEFLECTOMETER (FWD) is used. An FWD is used as a testing device for measuring the physical properties of pavement. This is a nondestructive and non-intrusive process, and is generally preferred over other destructive testing, because tests are not only faster but also do not entail removal of pavement material
A falling weight deflectometer (FWD) is a device that is designed to simulate the loading of a wheel passing over a pavement and measure its vertical deflection response to that load. During the test, a known weight is dropped onto a circular load plate on the pavement surface, and the resulting deflection is measured by sensors placed around the load plate.
Key Advantages of the Falling Weight Deflectometer
• Automatic and fast structural pavement testing relevant to pavements all over the world
• Regulates the layer of failure, rather than determining the bearing capacity
• QA/QC of afresh built pavements
• Equates a variety of rehabilitation choices, including plane off and recycling rather than applying overlaps.
• The use of the FWD offers correct, reproducible and repeatable structural information.
• Automated and real-time intensive care of the load cell, geophones, and data differences safeguards high quality of composed statistics.
• Practices mechanistic-empirical analysis applicable to most of pavement structures 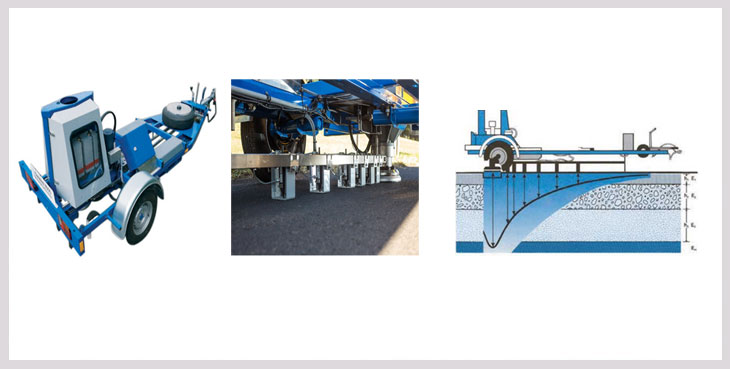 Almost half of all traffic accidents occur in the evening, during the dark hours of the night and early morning. However, only a quarter of all trips occurred within the same hour - this is a surprising and serious statistic. On the dark, dull road, almost all visual cues disappeared, except for those retroreflective signals (signs and markers). The few remaining tips are crucial for driving, and if they become so worn that they are no longer easily visible, the chances of missing information become greater, leading to an increased likelihood of the driver making mistakes, which may Lead to traffic accidents. The urban area presents different environments related to the retroreflection of the sign. Other light sources, such as advertising signs and commercial lighting, can cause traffic signs to compete to attract driver attention. In many cases, traffic signs must have a higher rate of retroreflection in order to stand out from the competition.

Unfortunately, the retroreflective properties of traffic signs and pavement markings deteriorate over time. Therefore, it is important to replace these assets before they meet the needs of the night drivers. The main question is not whether the equipment should be replaced, but when is it replaced? How do we know when a device no longer meets the needs of the driver? 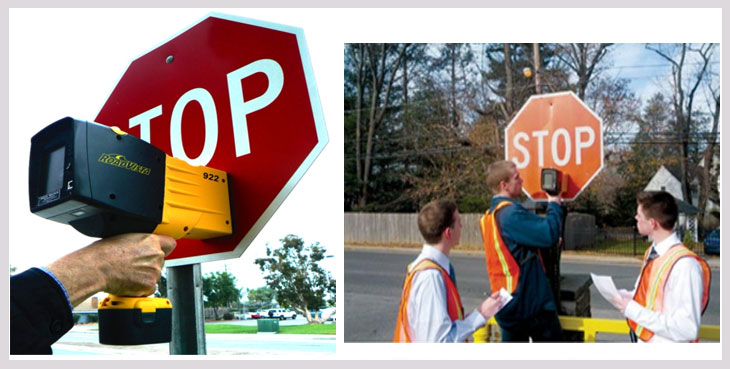 LiDAR is a remote sensing technology which uses laser pulses for the scanning and measure 3D dimension of an object with a 3D Data Capture .It performs point cloud scanning by bombarding millions of laser points and measures the reflected scan. LiDAR can be mounted on various platforms like terrestrial, mobile and airborne, depending upon the object to be scanned. The data accuracy of the LiDAR scanner varies from cm to mm. This accuracy can be obtained as per the requirement of application. The application of LiDAR has a variety of role in roads & highways. 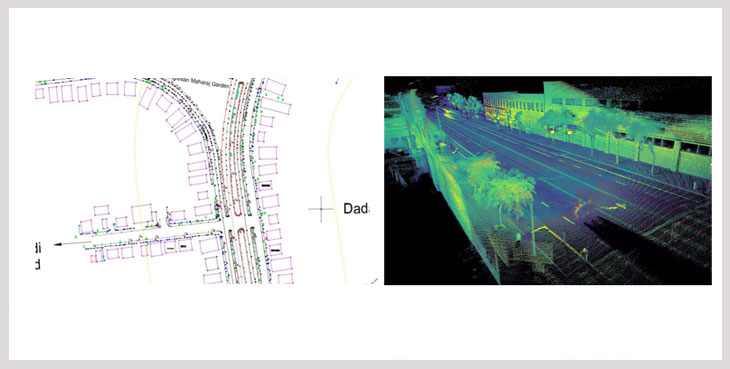 We use, a four-wheeler vehicle which is mounted with high frequency (2 GHz) horn antennas to measure the pavement thickness accurately up to 2 mm for the depth of about 0.7 m and the low frequency (400 - 900 MHz) antennas are used to study the underground utilities up to about 4 m depth. This GPR system is called IDS RIS Hi-Pave Horn antennas. A GPS and video camera are also connected to this system which gives the position & location details accurately. 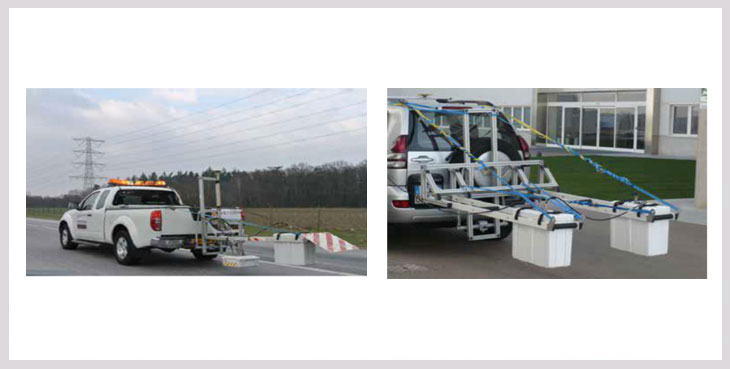 We at “PETROCON ” can prepare accurate base maps (up to 10 cm in X, Z, X) for Smart City & 3D City Mapping of various sizes using the combined hybrid technology as follows:

Land Plan Survey is the systematic process of finding out the Road / Highway Land Width available with the Government (usually State Highway or National Highway).
Cadastral & Land Plan Surveys along the existing Highways or Railways are required to know the extent of road side land or the corridor, general known as ROW (Right Of Way) which is owned by the Government or the Department.
After preparation of Land Plans using accurate techniques, the encroachment within the ROW can be known. In case of widening of the existing highways and railway tracks, after knowing the existing extent of land width, the proposed land acquisition proposals and utility shifting estimates can be prepared, which are highly important components in the widening / up gradation projects. 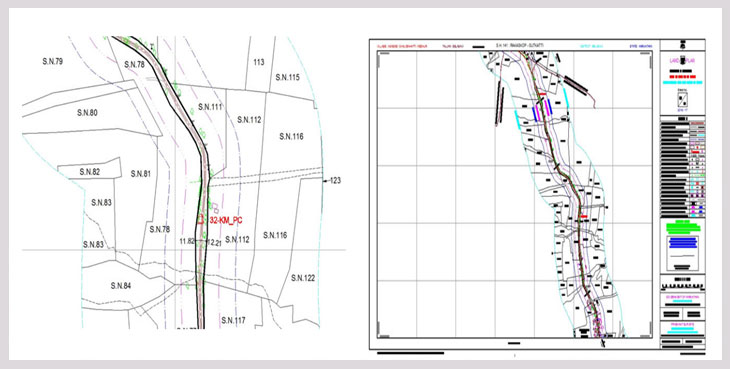 Land Plan Survey is the systematic process of finding out the Road / Highway Land Width available with the Government (usually State Highway or National Highway).
Cadastral & Land Plan Surveys along the existing Highways or Railways are required to know the extent of road side land or the corridor, general known as ROW (Right Of Way) which is owned by the Government or the Department.
After preparation of Land Plans using accurate techniques, the encroachment within the ROW can be known. In case of widening of the existing highways and railway tracks, after knowing the existing extent of land width, the proposed land acquisition proposals and utility shifting estimates can be prepared, which are highly important components in the widening / up gradation projects.

Unmanned Aerial Photogrammetric Survey is the use of Unmanned Aerial Vehicles (UAVs) or Drones to take photos for use in photogrammetry, the science of making measurements from photographs.
Instruments manufactured for UAVs could be mounted on unmanned flying platforms of various sizes and types, such as octocopters.
These machines are suitable for the full geodetic survey of a study site by creating a point cloud of measurements of nearly homogenous quality and accuracy.
These detailed point clouds (of various types of data) could be used in line with orthophotos etc. to obtain a complex data system representing the study site.
UAVs are suitable to acquire three-dimensional digital models and orthophoto mosaics for a certain area. 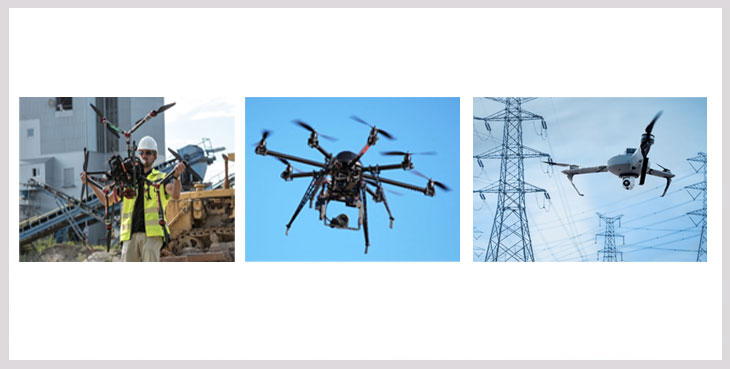 In general terms Bathymetry is defined as for measurement of ocean depth through depth sounding. Bathymetric Lidar is a technique to capture geospatial data of the coastline and (shallow) waters.
It offers a cost effective solution to wide area surveys which are impossible, difficult or expensive to access or complete using conventional acoustic systems.
Bathymetric Lidar is the most effective and cost-efficient technology to capture both the land and seafloor simultaneously to provide a continuous, detailed 3D elevation model along the coastline.
Petrocon provides highly accurate Bathymetry post processing services and having dedicated LiDAR classification staffs. 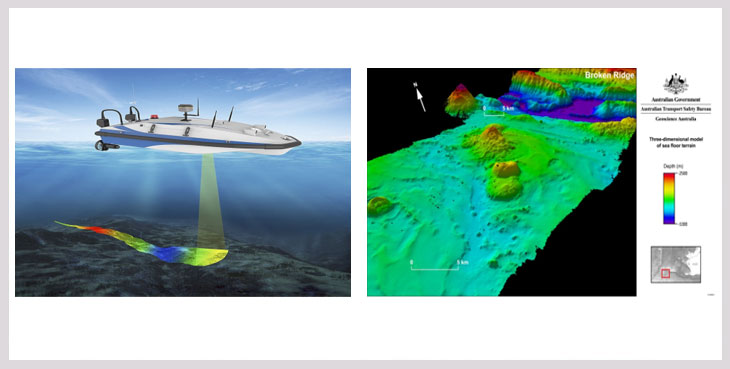 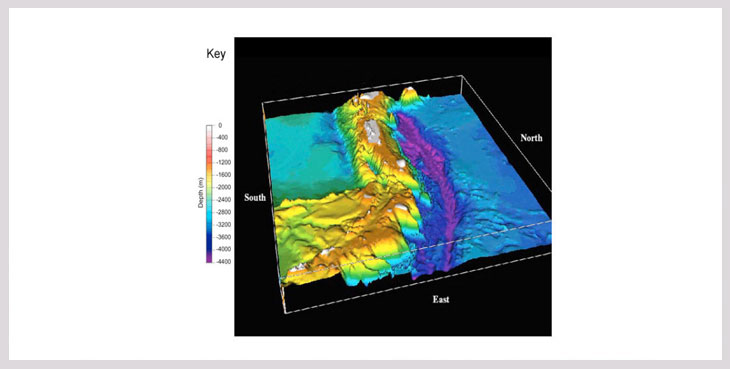 3D point cloud data captured is very dense and huge in size along with the photographs. The processing of processing this 3D point cloud data with the assistance of co-related photographs using high capacity workstations and suitable software’s is quite challenging. It requires expert and skilled personals with sufficient work experience for converting these 3D point cloud data to meaningful 2D and 3D Autocad or Arc GIS compatible drawings which can be used by the clients or the end users.
We at “PETROCON” have developed an efficient, in-house 3D point cloud data processing team with sufficient experience and knowledge using state of the art Leica software’s and higher end workstations for delivering the output in simple Autocad or Arc GIS format.
“PETROCON” has the knowledge and expertise to procure, process and provide customized GIS solution or generate accurate base maps using any of the High-resolution satellite images as per the requirements of the project. We have already procured and used ‘Digital Globe’ and ‘Indian Cartosat’ High resolution satellite images from NRSC, Hyderabad (a nodal Government body under ISRO in India) for many of our Government projects in India. 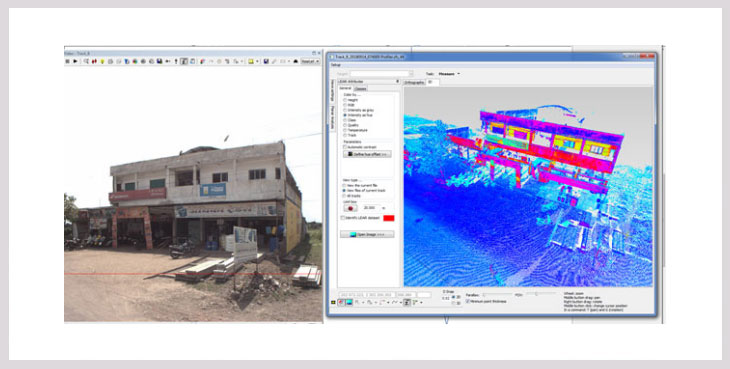